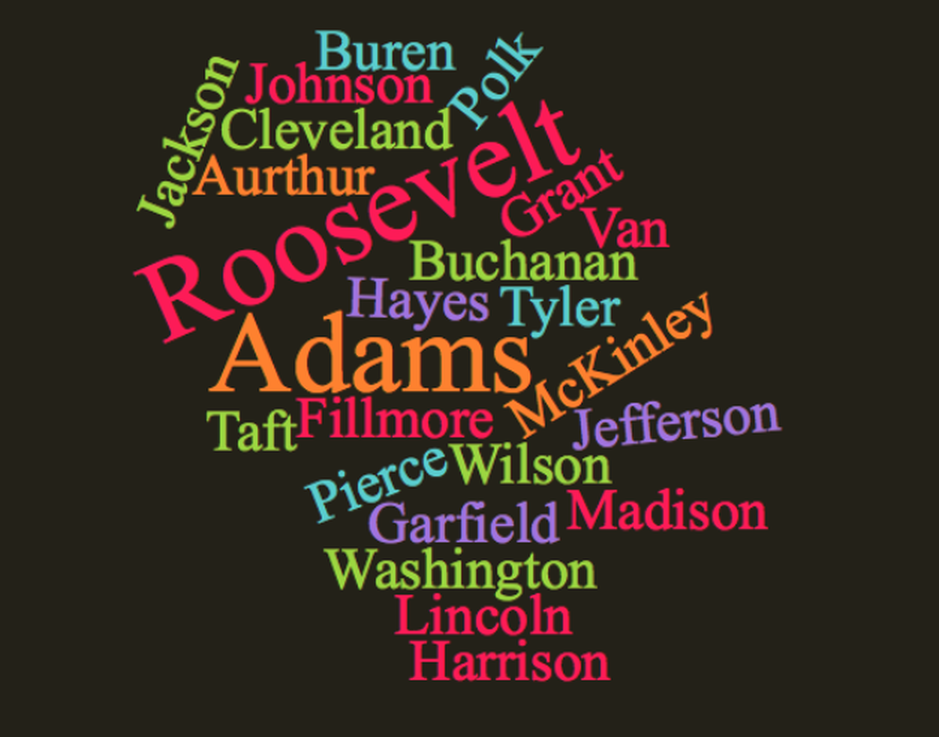 Last week we were assigned the two handouts for the Presidents.  It has been mentioned three times at least.  You are to place the dates near the pictures. An example like [1980-1988] as an examples for which President?  Please try to get all of them done.  We are looking at May 26th to be the due date for the last personal interactive notebook.  If there are scheduling conflicts we can talk as a class.  Textbooks will be turned in so you can use 5/11/17 for notes.  Best wishes.  Send a message if you need help.  Mr.C

The President says "History and Culture are so important."

Some social science experts are unable to figure out exactly what the statements of the commander and chief mean.  Some believe that this is purposeful in making some incorrect statements to keep the media and news on ideas that may seem comical.  You will have to watch for yourself and later decide what matters and why it matters.  The conduct of each American can have great impact on out democracy.  Leaders can have an even larger impact on our society.

Is America not giving Trump a Chance? 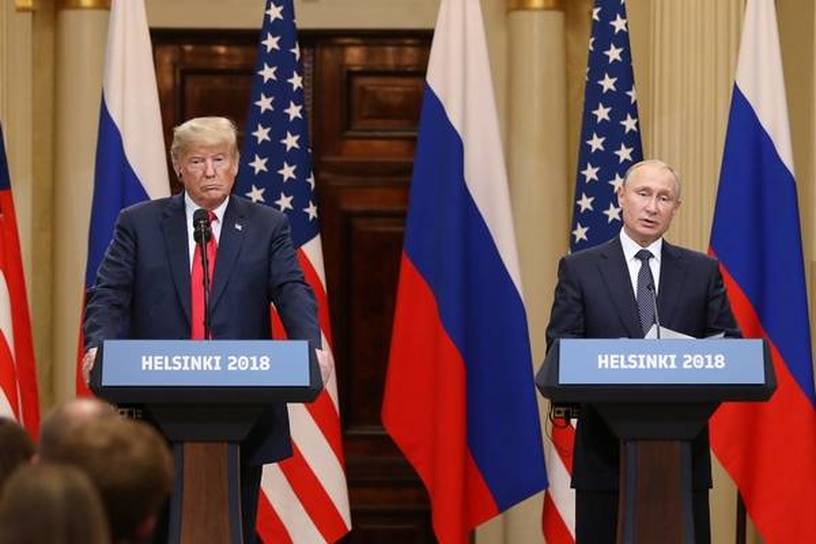 LEST WE FORGET The Big Lie Behind the Rise of Trump from BillMoyers.com on Vimeo. 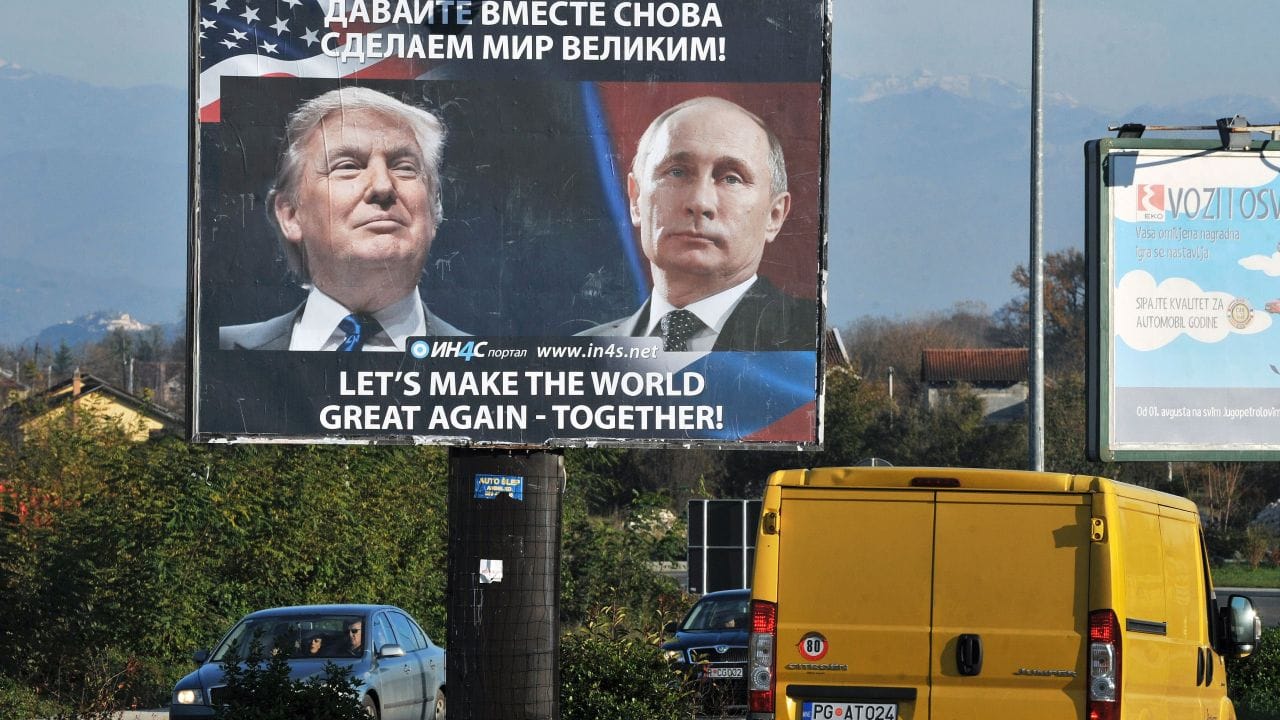 Cars pass by a billboard showing US President-elect Donald Trump and Russian President Vladimir Putin placed by pro-Serbian movement in the town of Danilovgrad on Nov. 16, 2016. Putin and Trump spoke on the phone Nov. 15 and agreed on the need to normalize ties between Washington and Moscow, the Kremlin said. (Photo by Savo Prelevic/AFP/Getty Images)
Enough of you have been asking in class during our class discussions, "Why has the current President not been given a chance?"  This does seem very complicated.   I know that CNN has been reporting on many stories and you should be staying tuned to the issues and facts.  But there is so much to know, you need to make sure you do not get lost in the trees.  Alexis De Tocqueville believed that as Americans one of our most vital jobs is to become intellectually prepared for voting and participation in Democracy.  In class we are in the 1830-1850s and we see American institutions that we have long worked to change, and hope they will never come back to control power in our democratic society.  Below are some stories you might want to listen to:
​

Keep searching!
Due to the California State History Social Science Content standards you will only be able to learn about WWI and WWII in your 10th and 11th grade years.  You will learn about the years of ideological fights with Russia's economy and forms of government, Czarist and Communist.  It seems really difficult to explain to you right now that since WWII, the Russians became our fiercest enemy, and we spent years bankrupting Russia, to take down the "Iron Curtain" a term coined by Winston Churchill.​   We spent trillions to win the Cold War with President Reagan at the helm.  When Gorbachev came into power he was very helpful to create better relations with America and facilitate Detente.
​see below
First 2 weeks
During the Cuban Missle Crisis of 1962 Kennedy had to figure out a way to not let Kruschev enable Fidel Castro to start WWIII from Cuba.  The leaders of the world have not always made decisions that have benifited most working citizens and civilians.  We as history students can only hope that moderate educated Republicans can see very quickly the mistakes that they have made.  Trump has already said to crowds on his thank you tour that he really did not mean what he said during the election race.  Now many world leaders think we are to be laughed at because of our voting choices in November 2016.

The Trump cabinet choices are alarming to many Americans.  The Secretary of Education has never been in a school system working.  A Labor secretary that does not believe in a minimum wage.  Further, Republicans have decided that the Department of Education is to be abolished by December 2018.  And an Energy Secretary who does not believe in the Department, which is also going to be abolished.   This legislation was introduced this week in Congress.  Almost all students get help with student loans through the Education Department.

Anyone who has never worked in Government has way too much to learn, and when it is the hardest job in the world like President you need experience.  If you want to facilitate the job correctly, with the fewest mistakes to keep the world safe, you have a lot to learn.  The Red Scare, MaCarthyism, and Cold War paranoia created an America that is afraid of ensuring All men are Created equal.  We fear the ideas that all Americans could peacefully prosper and share the wealth of this great land.  Only if you keep learning more can we be able to fix the issue that faces our nation?  Lastly, you need to care about your fellow citizens of the world as the United States President.  We have not shown that lately.

So there is so much to tackle to understand if there is really a large portion of Americans not "giving Trump a chance".  Or are Americans afraid institutions are being destroyed.  Institutions in place across this nation exist because Americans fought to have these institutions and industries. We must be careful what we think is happening.  Please use the class brochure and bring important questions with you to class.  It will take time to know if this blogs question can even be answered.  Also, watch out for news that may not be truth seeking.  We can check the information to ensure that it might be correct and that helps all Americans. In the end, you have to decide for your self-based on what you know from history. Keep researching.  Good luck.  Best wishes.