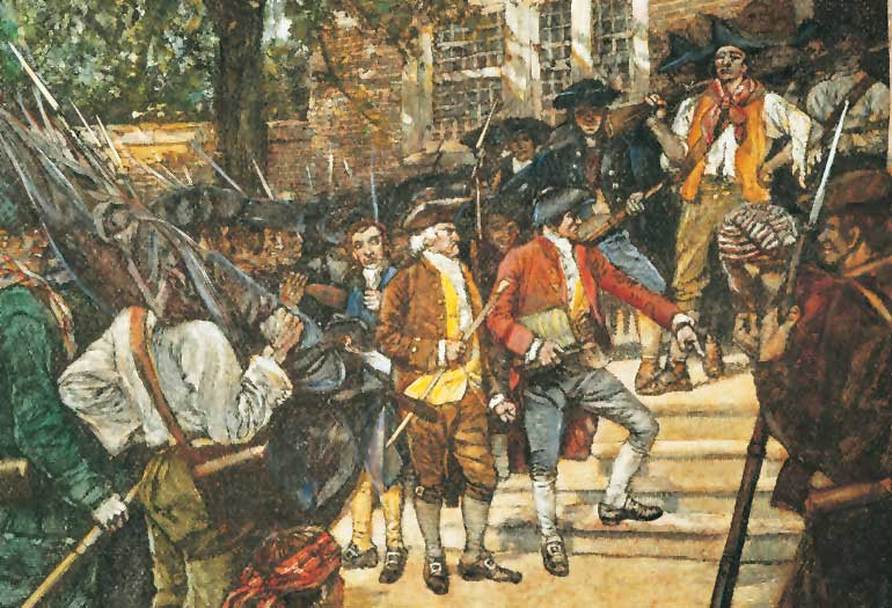 For this Week's wayback homework and classwork you will take notes [input] on  the video and there is a link below.  We will try to finish this in class but anything left I would like you to watch at home.  If you want to watch the entire video you can.  Please ask for help when you get stuck.  Please research more if you need to check your notes.  Good luck and and follow the social contract.  Work on your agendas too!  Please use the 11 sentence paragraph format when answering the  essential question for the output.  This is MONDAY night's homework.  Mr. C may be checking this in the paragraph in the next few days.  It should be in your notebook and on the table of contents. There should be an answer the essential question.

Essential question:  Why did Daniel Shays take up arms against the leaders of the new nation before the Constitution was signed and ratified?

The rebellion decided on these as a list of grievances:

FIRST: The present system of taxation operates unfairly between the poor and the wealthy classes.

SECOND: The tax rates have been set too high.

THIRD: There is a shortage of cash money, and farm goods are not accepted as payment for debts and taxes.

FOURTH: Court and lawyer fees are set too high.

SIXTH: The state capital at Boston should be moved inland.

The Recent Rebellion in Massachusetts

My name is William Jonas. I am a farmer from the town of Hubbardston, Massachusetts, in Worcester County, located in the middle of the state. Farming is hard here. The growing season is short, the winters long and harsh.

Since the end of the Revolution things have not gone well for the farmers in Massachusetts. Many of us left our homes to fight the British at Lexington, Bunker Hill and later Saratoga in New York. When we got back from the fighting, our farms were in poor shape. While waiting for our back wages from the Continental Congress, we borrowed money to buy livestock, tools and seed.

Our overdue wages never came. Then the price of corn fell. Worse, the state legislature in Boston increased the property tax. The legislature also passed a head tax that made the poor pay at the same rate as the rich. Even though we could not pay, our creditors badgered us for money.

To make matters even more difficult, there were hardly any gold or silver coins in circulation. Paper money was worthless. We offered to pay off our debts in corn, butchered meat and other farm goods. But the creditors and tax collectors would take only hard cash. A few farmers had been thrown in jail for failure to pay their debts. We were afraid that when the Court of Common Pleas in Worcester opened again, more would follow.

There was one hope. We organized a county convention to prepare a petition asking the legislature for help. Some wanted to take stronger action. As one farmer proclaimed, "I have lost a great deal...and I think it is time for us to rise, and put a stop to it, and have no more courts, nor sheriffs, nor collectors, nor lawyers." That man was gaveled out of order, but his point was made with us.

FIRST: The present system of taxation operates unfairly between the poor and the wealthy classes.

SECOND: The tax rates have been set too high.

THIRD: There is a shortage of cash money, and farm goods are not accepted as payment for debts and taxes.

FOURTH: Court and lawyer fees are set too high.

SIXTH: The state capital at Boston should be moved inland.

As the day for the opening of the court in Worcester approached, we still had not heard anything from the legislature. So we had a town meeting in Hubbardston to decide what to do. We read a letter sent around the county calling for us to follow the example of the farmers of Hampshire County and march to the court. If we could prevent the court from opening, none of us could go to jail for being in debt. Some citizens at the meeting cautioned that this would be an act of rebellion, even treason. In the end, most of us decided to march.

About 200 of us from several towns paraded into Worcester on September 5, court day. Armed with muskets and clubs, we took up a position outside the courthouse. We were determined to allow no judge to pass.

After a while we could see Sheriff Greenleaf leading the judges towards the courthouse. One of them, Judge Ward, advanced until the bayonets were pressing against his large stomach. "Open the doors," he ordered. The door opened, but he could see more men with muskets inside.

Judge Ward then asked, "Who commands these people?" Nobody answered. "I say who is your leader?" he asked a second time. Still no reply. We were stunned. In truth we never organized ourselves into any military unit with proper officers.

Finally, my friend Adam Wheeler, replied to the old general, "I am not the leader, but I can tell you what we’re here for. We’ve come to relieve the distresses of the people. There will be no court until they have redress of their grievances." The men then moved even closer to the judge, piercing his silk robes with their bayonets.

"I am not afraid of your bayonets!" Judge Ward shouted stubbornly. "I shall prove to you that you have been deceived and deluded." He then lectured us for two hours on the dangers of rebellion and treason. Only a rainstorm ended his oration. His final words to us were, "May the sun never shine on rebellion in Massachusetts!" Judge Ward adjourned the court session to November 21. We all went home.

Back in Hubbardston, we still waited for a reply from the legislature to our county convention petition. At last, in October, we heard from the state legislature. It finally passed a law that allowed our farm goods as payment for taxes, but the representatives in Boston addressed none of our other grievances. Instead, the legislature and Governor Bowdoin passed a Riot Act. They also authorized sheriffs to put those who marched against the courts into jail without charge.

On November 21, we marched once more to the courthouse in Worcester when Judge Ward again tried to start the court session. In our hats we wore sprigs of hemlock--the sign of our cause throughout the state. Sheriff Greenleaf read the Riot Act to us and told us to disperse. We told him that we would go away only when the judges did away with their high court fees.

"If you think court costs are too high," Sheriff Greenleaf said, "I’ll hang every one of you gentlemen with the greatest of pleasure without charge." We all laughed as the sheriff spoke because someone came up to him from behind and stuck a sprig of hemlock into his hat. Court did not open on that day.

One thing continued to trouble me. We still did not have a real leader. Then Daniel Shays came to town. Daniel Shays was from Pelham in Hampshire County and a former captain in the Continental Army. I recognized him from the Battle of Bunker Hill. Farmers in Hampshire and Berkshire Counties almost immediately looked to him for leadership. Maybe it was because he had been an officer in the Revolution. We cheered as Daniel Shays marched into Worcester with 350 armed men.

On December 3, Governor Bowdoin called up 170 militiamen to make sure the court opened in Worcester. There were about 200 of us, with Daniel Shays in command, waiting for the militia when they arrived at the courthouse. For a time we stood facing each other eye to eye. Then the militia withdrew. There would be no bloodshed on that day.

As Christmas neared we marched to Springfield in the western end of the state. On December 26, Daniel led 300 of us to prevent the court there from holding session. Shortly thereafter, we heard that Gov. Bowdoin and the legislature were organizing 4,000 militiamen to subdue us. We knew that if we were going to save our necks from the gallows, we had to defeat the government.

Daniel and his lieutenants, Luke Day and Eli Parsons, came up with a plan to seize the Springfield Arsenal. With the arms stored there, we could hold out against the state militia. We had to act fast. The militia was marching against us from Boston under the command of Gen. Benjamin Lincoln, a famous Revolutionary general.

On January 25, I was with Daniel Shays. When we got near the arsenal, we found it already defended by about 900 Hampshire County militiamen. We outnumbered the militia a little bit, but they had a cannon. Worse still, they were neighbors and even kinsmen. Could we ever shoot at them? Could they shoot at us? Still, we advanced.

Suddenly, at 100 yards, Gen. Sheppard ordered the cannon fired over our heads. We marched onward. The cannon discharged a second time. Again the shot fired passed above us. We could not believe that Massachusetts men would harm other Massachusetts men. Then the unthinkable happened. The cannon let loose a third time and blasted directly into our center ranks.

"Murder! Murder!" cried several of our men. Through the smoke we could see one...two...three of our friends cut down and another dying in the snow. Disbelief. All was confusion as we ran for our lives. For me the Rebellion was over. I just heard about the rest of the story from the others.

Gen. Lincoln and his state army arrived in Springfield about two days after the incident at the arsenal. Shays’ men, now all feeling the grip of the hangman’s rope, fled northeastward.

When a blizzard struck, the remnants of Shays’ force believed Gen. Lincoln would not follow, but he did. When he caught up with them, he took 150 prisoners. The rest scattered to their homes or crossed the border into Vermont with Daniel Shays.

Gov. Bowdoin and the Massachusetts legislature wanted Shays’ men marched to Boston for trial and severe punishment. Sam Adams, that old revolutionary who had taught Massachusetts farmers how to close down courts and hold tea parties, was now a member of the state senate. Adams argued that they should be treated harshly. "In monarchy the crime of treason may admit of being pardoned or lightly punished," he allowed, "but the man who does rebel against the laws of a republic ought to suffer death."

About a dozen men were actually sentenced to hang. The others got pardons. A bounty was put on the heads of Daniel Shays and three other rebel leaders. Luckily for them, they escaped to Vermont.

In April 1787, state elections were held and the legislature became more moderate. Also, the voters put a new governor into the statehouse: John Hancock. The new government cancelled the death sentences, although two of Shays’ men were hanged for stealing. It also lowered taxes, released debtors from jail and passed other acts alleviating the grievances that had started the rebellion in the first place.

The following month, the Constitutional Convention began its deliberations in Philadelphia. For men like George Washington and Alexander Hamilton, Shays’ Rebellion had been a warning. Next time the forces of law and order might not be so lucky.

For Discussion and Writing

1. If you had been a Massachusetts citizen in 1786, who would you have supported: Daniel Shays or Gov. Bowdoin? Why?

2. During Shays’ Rebellion those supporting the court-closings called the Massachusetts government a tyranny. At the same time those who opposed Shays and his actions said things like, "Monarchy is better than the tyranny of the mob." Who do you think was right? Why?