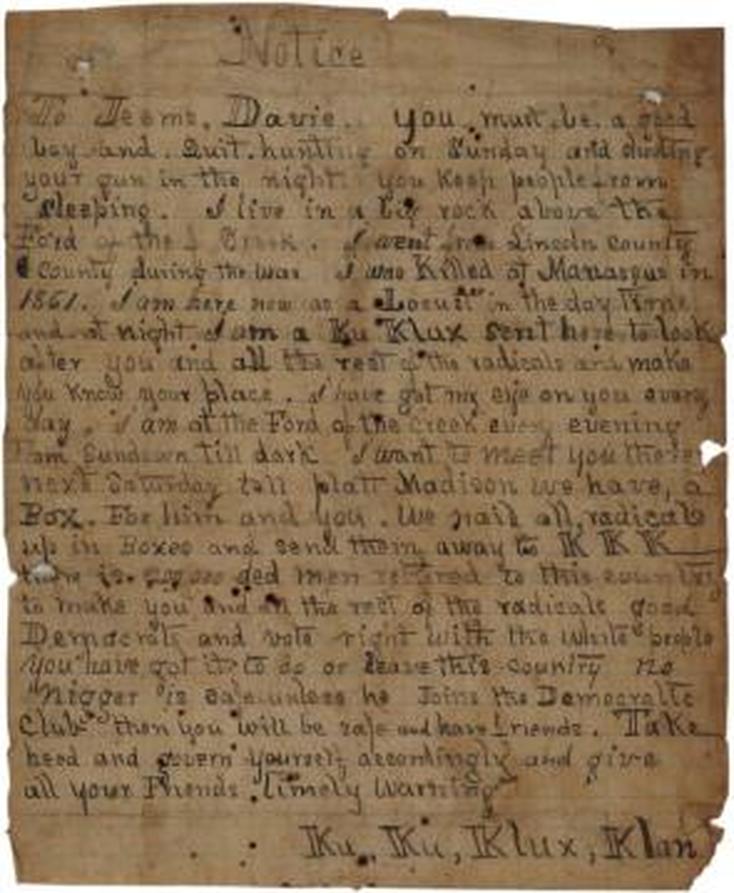 The Wayback this week will be this letter that was used by ex-Confederates/seccessionists to scare a newly freedman from participation in southern society with political and social power.  The idea of equality was not supported by many Americans.  The idea of white supremacy became an organizing idea to suppress any changes to create a new free south.

Transcript
PBS Transcript from Block schedule day 4/25.
NARRATOR: A shadowland of secret clubs and societies began to take shape: in Mississippi, the White Liners; in Louisiana, the Knights of the White Camellia -- and across the South, the Ku Klux Klan.
WALKER: If you grow up in a society in where, for centuries, you have been taught that other people are your racial inferiors, it's very hard to accept the enormous social change involved in their emancipation. Any benefit that accrued to blackness was interpreted as a loss of whiteness. Education, the acquisition of property, was viewed as somehow unnatural.
AYERS: The Ku Klux Klan does not see itself as Lawlessness, but as the Law. Because they do not believe that black men deserve political power or know what to do with it once they have it, they think that it's their right, maybe even their Christian responsibility, to destroy black political power before it has a chance to become too entrenched.
KKK, ABRAM COLBY WHIPPED
NARRATOR: Abram Colby had been elected to the Georgia legislature, along with Tunis Campbell. The Democrats wanted to curb his power in the county. They tried bribes, but Colby turned them away. In October of 1869, the Klan set out to teach him a lesson.
NELL PAINTER, HISTORIAN: They were the mercenary forces of the Democrats, who were trying to regain power. They were not simply using the ballot, because they felt they would lose at the ballot box. They were using violent coercion. They were eliminating their competitors.
NARRATOR: Colby's attackers could not hide behind their hoods.
READING, ABRAM COLBY: Some of them [were] the first-class men in our town. One is a lawyer, one a doctor, and some are farmers. I knew the voices of those men as well as I know my own.
BLIGHT: They would take people out of their houses or their cabins in the dark of the night, strip them out in a road, make them run down the road, make them sometimes lie on a rock where they would be whipped, where men would line up to whip them. Sometimes they would burn parts of their bodies. These were, these were sadistic tortures.
COLBY: They said to me, 'Do you think you will ever vote another damned Radical ticket?' I said, 'If there was an election tomorrow, I would vote the Radical ticket.' They set in and whipped me a thousand licks more.
WALKER: This was a war of terror. The Ku Klux Klan, organized in 1867, is an original American terrorist organization.
​